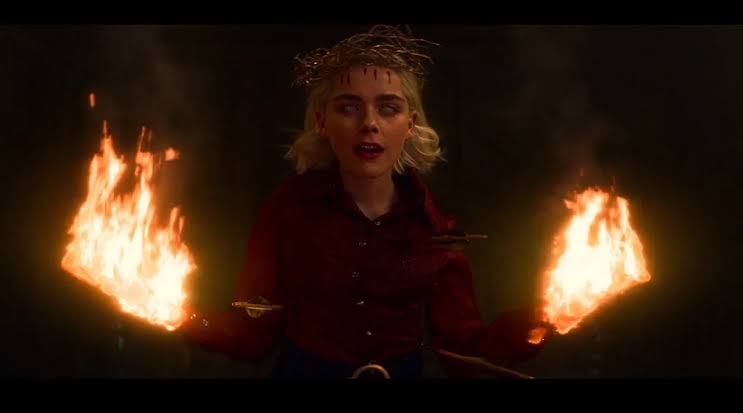 Netflix’s series “Chilling Adventures of Sabrina” all set to arrive with an all-new season of there series. There will be a teaser out in just one day. We are all excited about the upcoming season. Read the full article for more details.

The main character of the season, Sabrina Spellman, will go straight into the bowels of hell. The whole world of her is about to get hotter.

We had seen that at the of the Chilling Adventures Of Sabrina Season 2, Nicholas found himself a vessel for the Dark God and goes into hell.

To protect Greendale from evil alongside Sabrina-Theo and his team committed. We can find something interesting, like the love between Theo and Sabrina, which will make season 3 impressive.

The season three of Chilling Adventures Of Sabrina is all set to come on Netflix by January 24, 2022. Still, we are all waiting to watch the new season as soon as possible.

something’s coming, witches. are you ready? only three more sleeps…

A post shared by Chilling Adventures of Sabrina (@sabrinanetflix) on Jan 6, 2022 at 9:00am PST

A post shared by Chilling Adventures of Sabrina (@sabrinanetflix) on Jan 6, 2022 at 9:00am PST

This all post is regarding the cast addition of the next season, which is confirmed now. Sam Corlett (The Dry), Skye Marshall (The Fix), and Jonathan Whitesell (Riverdale) which were not confirmed before the day. But now they gave confirmation for there presence in the next season.

Some details about new characters are

Corlett’s Caliban is a black attractive young man with an amazing charm which is a Prince of Hell, sculpted from clay from the City of Pandemonium. The fight between Sabrina and him is so interesting that he challenged Sabrina for the control of the thorn of hell.

Marshall’s Mambo Marie is a gorgeous voodoo priestess which is on the positive side of the script. She helps Prudence and Ambrose to knock down the villain Blackwood. She has her own secrets work and things which drawing her towards our coven and Zelda.

Whitesell’s Robin is the handsome young man who is also mischief creator at some times. Across the traveling with the carnival, he comes to Greendale and grows his feelings for Theo.

We got the change and addition in the star cast of season 3 that we can get the idea which character will be in for the next season.

This all is the cast for the next season of Chilling Adventures Of Sabrina Season 3. Get touch with our website for more details of the series and movie’s news.