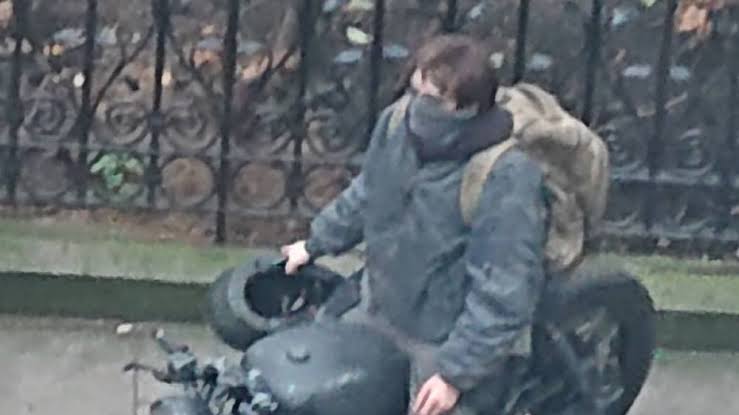 Since the announcement, we are all excited to see Robert Pattinson as in the role of Batman. Meanwhile, we got the new unseen pictures of Robert on the set of Batman, which is filming in London. Read the whole article to see all the photos and news.

A fan of Batman series shared this photo on twitter, which releases the first look of Robert as Bruce Wayne for his upcoming movie Batman under the direction of Matt Reeves.

The British actor Robert who is 33, was cast as the DC superhero last year after Ben Affleck stepped down from the role.

The photos which gone viral are from London in which Robert is sitting on the motorbike, wearing a green jacket and a scarf to cover his mouth.

Is this London or Gotham…..?
Filming The Batman ? outside my offices this morning! ? @empiremagazine pic.twitter.com/Mszt5wLcYG

After sharing the photos of shooting the fan captioned it with

“Is this London or Gotham…..?
Filming The Batmanoutside my offices this morning!”.

It seems like it is real pictures from the set of Batman in which we can see the police car written with Gotham Police and also the cast members are in the police uniform.

A fan Again tweet that will blow your mind if you are a fan of batman and Dc series.

Just want to clear something up!
My pic on the left was taken at 12.30pm when they used a stand-in to set up the shot.
My pic on the right was taken at 3.30pm when filming was active and it's clearly Robert Pattinson.
Trousers, boots, jacket all have differences ? pic.twitter.com/htYFo2onbr

It can see that he is Robert in the shooting of Batman’s movie.

The movie is running in the direction of Christopher Nolan. It’s like new things which are different from the older Batman Movies.

The movie is going to release in 2023. And the cast of the film is Zoe Kravitz as Selina Kyle, Paul Dano as The Riddler, Andy Serkis as Alfred and John Turturro as Carmine Falcone. Still,  rumors of Jonah Hill is not confirmed.

The film was previously supposed to be directed by Ben Affleck, who was also expected to return in the title role. Now he is replaced with Christopher Nolan after the failure of the Batman v Superman movie.