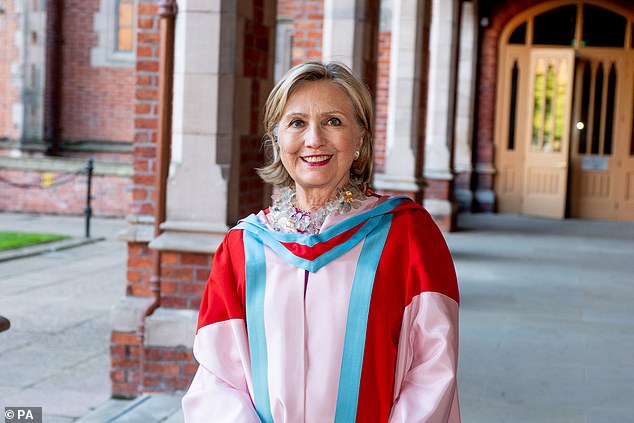 Hillary Clinton, the former U.S. Secretary of State, has been appointed Chancellor of Queen’s University Belfast.

In Northern Ireland, she takes up the mostly ceremonial role where the peace process was one of the greatest successes of her husband’s presidency.

The Queen’s University is a 175-year old institution and is one of the oldest in Britain, and Hillary Clinton, 2016 U.S. presidential candidate, became the first female chancellor of the institution.

‘It is a great privilege to become the Chancellor of Queen’s University, a place I have a great fondness for and have grown a strong relationship with over the years,’ Clinton said Thursday.

Clinton visited Belfast to support the 1998 Good Friday peace accord during her time as Secretary of State from 2009-2013,

The peace accord ended the 30 years of violence between Catholic nationalists seeking union with Ireland and Protestant unionists who want Northern Ireland to remain part of the United Kingdom.

In her statement, Clinton added, ‘The university is making waves internationally for its research and impact, and I am proud to be an ambassador and help grow its reputation for excellence.’

In mid-1990s, Clinton travelled with her husband to Northern Ireland several times during the Good Friday talks.

Bill Clinton’s hands-on approach was widely recognized as crucial at moments when the agreement looked like crumbling.

George Mitchell, a former U.S. Senator and U.S. Special Envoy for Northern Ireland chaired the talks that led to the Good Friday Agreement, served as chancellor of Queen’s from 1999 to 2009.

However, Hillary was widely criticized as she exaggerated her role in the peace process when she claimed that she was ‘instrumental’ in bringing peace to northern island, also at that time she was battling Barack Obama for the Democratic presidential nomination in 2008.

According to Queen’s, a few of the crucial roles and responsibilities that Clinton will behold for the next five years involves presiding at degree congregations and acting as an ambassador and advisor for the university.

Queens pro-chancellor, Stephen Prenter, said that he was delighted by appointment.

He added, ‘Secretary Clinton has made a considerable contribution to Northern Ireland and as an internationally recognized leader will be an incredible advocate for Queen’s and an inspirational role model for the Queen’s community.’