Home Entertainment Anime Most Iconic Japanese Anime Characters – Who Are They!? 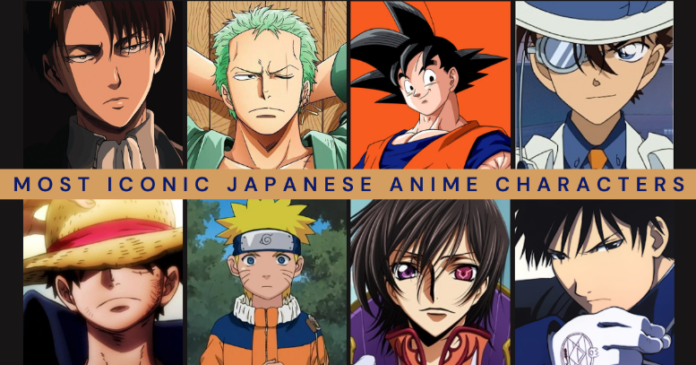 From giggly Pokemon to huge robots and courageous ninjas, these characters each bring something unique and special to their stories. Out of all the beloved characters out there, it can be hard to narrow down who exactly makes up the most iconic ones.

So if you want to know about some standout stars from Japan’s animated genre, keep reading as we explore who some of these most recognizable and renowned icons are!

Levi Ackerman is a fan-favorite character for many people! His gruff, no-nonsense attitude attracts many viewers even in the face of danger, and although he can be quite aloof and distant at times, Levi eventually warms up to the people around him – those ever so close to his heart.

His undying loyalty toward his commanding officers and his comrades makes him one of the most iconic characters in anime history. Plus, let’s not forget about his unique tactics in battle which often result in miraculous wins – it’s no surprise that his squad looks up to him as a leader and comrade.

What we appreciate even more is Levi’s resourceful mind and efficient ways of thinking. Nine out of ten times, Levi will come out triumphant with the utmost efficiency.

Roronoa Zoro is a beloved character from the classic anime series One Piece. He is a swordsman with extraordinary strength, an intense sense of justice, and loyalty to the Straw Hat Pirates.

Roronoa Zoro and his Earrings are instantly recognizable by fans around the world because his earrings are part of his signature look. Roronoa Zoro’s iconic earrings have become so famous.

Also, the character is famous for his “Green Alight” technique which involves slicing through his opponents in an impressive single strike.

Despite his brash attitude, he is incredibly generous and willing to risk his life for those most important to him. His friendship with Luffy has drawn many fans and they are both regarded as lovable protagonists of the series.

It’s no wonder why Roronoa Zoro continues to be revered among casual watchers and dedicated fans alike.

Goku is a larger-than-life anime character who captured the hearts and minds of millions around the world. His roots in martial arts and his incredible power have made him a unique and beloved hero.

Despite being an alien with the ability to turn into an ultra-powerful Super Saiyan, he remains humble, kind, and generous. He displays a level of faithfulness and commitment that is inspirational to all viewers, especially younger ones.

Goku’s bravery has time and time again been instrumental in saving everyone from extinction, proving himself to be a true hero who will always be remembered.

4. Kaito Kuroba: A Master of Trickery and Wit, the Ultimate Detective!

Kaito Kuroba is an international phenomenon. Once a carefree teen living in Japan, Kaito soon discovers his mysterious destiny as Kaitou Kid; the super-sleuth and world-famous master thief.

With an arsenal of gadgets and clever tricks, Kaito outwits his opponents as he races against time to solve challenging puzzles and escape in suspenseful getaways. Although Kaito’s adventures often involve complicated plot points with out-of-this-world foes, we find ourselves rooting for him every step of the way! With humor, charm, and wit, Kaito has certainly earned the title of the greatest thief on Earth.

Monkey D. Luffy is an iconic anime character and the main protagonist of the manga/anime series, “One Piece”. Luffy is an incredible pirate captain on a mission to find the legendary treasure known as “One Piece” and become the next King of Pirates! He’s known for his devilish sense of humor, his unique rubber-like body, and his enthusiasm and unwavering commitment to his crew.

Luffy’s battles always show off his strength, courage, intelligence, and loyalty – making him one of the most beloved characters in anime history. Whether you’re a fan or not, it’s clear that Luffy is Someone special whose legacy will live on forever!

6. Naruto Uzumaki: Ultimate Ninja, on a Quest to Save the World!

Naruto Uzumaki is a classic anime character and fans favorite! He started out as a carefree and reckless twelve-year-old ninja, with nothing more than dreams of becoming the strongest shinobi.

Throughout his journey in the Hidden Leaf Village, Naruto has become an idolized leader, inspiring people from all walks of life with his courage, wisdom, and strength. His determination to never give up no matter the odds is unlike any other–he never backs down from a challenge.

His friendship with Sasuke Uchiha and Sakura Haruno has grown stronger throughout their adventures together and shows that great bonds can form even in difficult times.

Naruto’s iconic ninjutsu abilities made him a powerful ally for the Konoha village and have led to many impressive victories! There’s no doubt that Naruto Uzumaki continues to stay an inspirational figure for generations to come.

7. Lelouch Lamperouge: A Brilliant Strategist With a Mysterious Past

Lelouch Lamperouge is an interesting and complex character who has captivated the hearts of anime fans around the world. He begins as a powerful rebel leader, fighting for justice through military action.

As he uses his Geass to influence others in pursuit of his goals, he is met with numerous obstacles throughout his journey. Though it might seem like Lelouch will eventually lose sight of what’s right, he ends up using his unique ability to make the ultimate sacrifice in order to save everyone he loves.

His story is an inspiring lesson on how any individual can make a difference despite their mistakes and failings.

8. Roy Mustang: Setting the World Ablaze With His Courage and Strength!

Roy Mustang is a beloved anime character who has taken the internet by storm! With his fiery determination and fierce loyalty to his friends, Roy endears himself to viewers time and time again. His trademark leather coat and penchant for explosions have earned him recognition across fandoms and made him one of the most recognizable characters in anime.

He’s won over tons of hearts with his level-headed nature and unwavering bravery, which makes him an inspiring figure for many people. From cosplays at conventions to media appearances, Roy Mustang has made an indelible mark on viewers’ lives around the world!