The degree of skill required to play Poker sets it apart from other traditional casino games. Knowing what moves to make, being capable of hiding your thoughts, and interpreting the other players’ emotions and actions are all essential components of the game.

Of course, a lot of this is covered by a screen if you’re playing poker online. However, playing at an online casino exposes you to other game variations you would not otherwise find at a physical casino or when playing in person. Although Texas Hold’em’s rules will be more known to novices, keep reading to learn about other variations you should know.

Let’s begin with Texas Hold’em, the most popular poker variation. The World Series of Poker (WSOP) circuit favors Texas Hold’em, which is played all over the world. The Poker Boom, which began more than 15 years ago, was also inspired by this game. Texas Hold’em ranks among the most-played games in top casinos according to legaluspokersites.com due to its easy playing format.

Hold’em is a community card game; thus, in addition to the two cards each player has, there are five more cards that everyone shares. In each round, these are unveiled one at a time and are referred to as community cards. Players must assemble the finest five-card hand they can using any combination of these seven cards.

There are two ways to win: either holding the best hand in the last round, or having the power to force every other player to fold or give up their hand. The pot is shared if there is a tie.

The flop, turn, river structure of Texas Hold’em, and other poker games are used in Omaha poker. The main distinction is that each player is assigned four cards, and they must use exactly two of those cards, together with three communal cards, to create their hand.

The best five-card hand is determined after the rounds of dealing and wagering when players display their face-down cards. Whenever there is a tie, the players with the best hands split the prize evenly.

One of three wagering formats—Pot Limit, No Limit, or Fixed Limit—is used for most online games. The rules for these three game kinds are the same with a few minor exceptions.

The most common variation of Omaha played online is called Pot Limit, where the maximum stake is capped at the amount of the pot, or $100 in this case.

On the majority of poker sites, the small blind, or minimum stake, is equal to the large blind.

As the name implies, there are no bet size restrictions in no limit games, allowing players to gamble all of their available chips.

The size of the bet or raise doubles after the flop, turn, and river (for example, if the large blind is $25, bet sizes are $50).

With a few key differences in the rules, Omaha Hi-Lo is a poker variation that uses the same dealing and betting structure as Omaha Poker (flop, turn, river). In Hi/Lo poker, the best “high” hand and the best “low” hand share each pot amongst their respective winning hands.

Although each casino may have somewhat different rules and variants, most Omaha Hi/Lo games have an 8-or-better qualifying. To win the “low” hand, your hand must consist of five different cards, each of which must be less than eight in value. The “high” hand is made up of cards that are 8 or greater.

The greatest conceivable low hand would be 5, 4, 3, 2, and Ace since Aces always count as low in a low hand.

Bet sizes and quantities are regulated and predetermined in Limit Omaha Hi/Lo poker. Similar to Fixed-Limit Texas Holdem, pre-flop bet sizes and raise amounts are equal to the large blind.

The size of the bet or raise doubles after the flop, turn, and river (for example, if the large blind is $25, bet sizes are $50).

Players are allowed a maximum of four wagers each betting round in this particular game type.

In Pot Limit, the most widely played variation of Omaha Hi/Lo online poker, the maximum stake is capped by the amount of the pot.

On the majority of poker sites, the small blind, or minimum stake, is equal to the large blind. 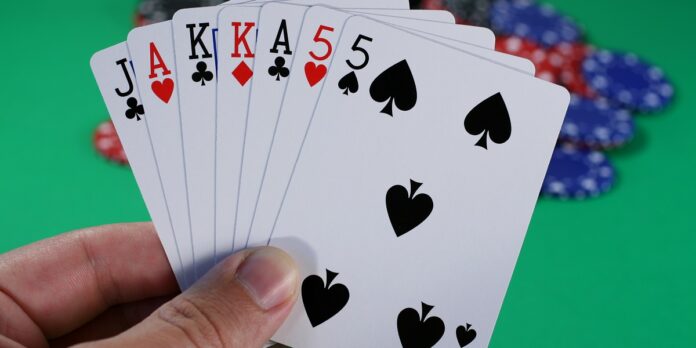 This form of poker may appear more complex than Hold’em at first, but it is a different game. First, there are no shared cards; each participant is dealt a unique seven-card hand.

Each player is handed three cards at the start of the game, two of which are face-down and one face-up. After that, there are five rounds of betting in which participants are dealt a new card—three face-up and one face-down—at each round. The game will proceed to a showdown if there are still players left after the last round of betting.

The goal of the game, like in Hold’em, is to use the seven cards dealt to you to form the greatest five-card hand you can using the usual hand rankings, where a royal flush is the best hand and a high card is the worst.

Because players can draw new cards, as the name indicates, draw poker is seen to be more challenging to learn. With this extra dimension added to the variety, decision-making becomes the only factor. When picking this variation, players will benefit from their familiarity with video poker machines found at online casinos because it is quite similar to such machines.

Five cards are handed to each player face-down to begin the game of Five Card Draw. Here’s where the fun begins; they may decide whether to keep their current cards or receive new ones, and they can also choose how many cards they want to trade (ranging from just one card to all five).

There are four distinct sections to the game:

Once the hand reaches showdown, the person with the best traditional hand wins, just like in the other varieties.