Home Entertainment Wynonna Earp Season 4. What we feel about the first episode with... As in the COVID thing, people started feeling bad for not having their favorite series episodes to watch. But within four months, Wynonna Earp came to save us, equipped with guns to slay demons. The episode gets released after two years, and COVID-19 further delayed the production. Finally, there was some hope in the universe when the episode was released.

If you had forgotten about what happened before two years, here a quick reminder about what happened. Warning below content is full of SPOILERS if you haven’t watched or want to see the solo killer Wynonna, some love stories, ridiculous fun, or found family, you might have to watch the season first.

At the start of the series, Waverly met her mother, Michelle. The meet didn’t go well, and got to know that she was born with a demon attached. The demon twin Jolene came to kill her, but she had no chance against the Earp girl.

While this was happening, Bulshar kept changing people to man-eating trees. While investigating, they stumble upon Robin, the historian, and Charlie, the sexy firefighter. With Charlie, Wynonna had some Romantic moments because of which Doc left her and let Kate, the vampire. Robin got kidnapped by the tree while investigating them. Wynonna and Charlie traced the trails and found the factory where Bulshar change the person to trees. They confront the minions, but Bulshar gets away.

Waverly found about her father; he was an angel. For which Michelle left her daughters to see him.

Wynonna finds Juan Carlo’s journal, where they get to know out that Bulshar’s tree strategy was to lead his way to get to the Garden of Eden. To go inside, there was a locked door that has to be unlocked. And the key to unlock is Peacemaker, for which Bulshar traps Wynonna and Doc. Meanwhile, the real Mercedes pops up. Waverly heals her jacked-up face of Mercedes with the ring of Bashar, which used to be of Julian. And she helped to way out Wynonna and Doc.

Wynonna already surrendered the Peacemaker, after which Bulshar turned the Peacemaker to sword and tried to open the door. But to open the door, the wielder has to be mortal.
After that, Waverly found out that Charlie what Julian. All of her empty blanks filled when she touched Julian. After this, Bulshar, with his army of minion, confronted the homestead to become mortal. For which he needed the blood of Wynonna Earp, which he succeeds too. Then Bulshar did the ritual to free the curse.

And showdown began, mortal vs. mortal, the girl got the upper hand in the fight. But Bulshar bites her neck, injecting deadly venom. Luckily Doc shows up and sucks poison. Meanwhile, a branch came out of the door from the Garden of Eden and kidnaped Waverly.
They tried to save her, but Wynonna couldn’t go through the door. Instead, Doc risked his life and entered in Garden. Wynonna went to rally the troops but finds everyone missing. But she found out ‘Valdez’ carved on the wall.

The show starts with showing Nichole, Jeremy, and Kate, who were arrested by private government militia. Nichole read the Tarot card for Waverly, which didn’t show any good news. Kate helps her to get out of the container train in which there were in with electric doors.

Meanwhile, Wynonna Earp and Sheriff Nedley, a retired BBD officer, regroup to find a way to get through the door. But she couldn’t go through the door. A ton of demon crab shows up, and one of them bites Nedley. After which, they retraced their way to homestead. Wynonna left Nedley with Mercedes to take care, while she found a file with Valdez’s name on it.

Wynonna Earp found out that she was a BBD scientist at Monument, a small town near Purgatory. Also, she was the part of Investigation for Garden of Eden. She sets off immediately for Monument. While she was on her way, her tire gets flat and becomes helpless. There she met Nicole, who was angry with her because she drugged Nicole, Jeremy, and Doc to fight against Bulshar alone. But as they had a lot of important work to do, they allied and arrived for Momentum.

Meanwhile, we see that Doc has entered the Garden of Eden, where she immediately located Waverly with chain choking her. He saves her by pulling the living rock from the well. They find the throne of Julian, where he sat to protect the Garden.

They found a staircase that was leading to the crib.  In the crib, Waverly found a lab coat guy who was thankful that they were safe and healthy. He said to them that, “ALWAYS KEEP HER FED WITH FRESH HUMAN BLOOD.” Moments after, he chops his head off, leaving Waverly freaked out. Doc tries o flip him up and feed the blood to the creature in the well.
In Monument, Wynonna and Nichole break into BBD factory where they found Dr. Gloria Valdez’s daughter, Rachel. While breaking in, they found undead humans, which resulted in exploding the BBD office to save their back. While fighting with zombies, Wynonna steps on Grate, Nichole pushes her and ends up falling in oblivion. 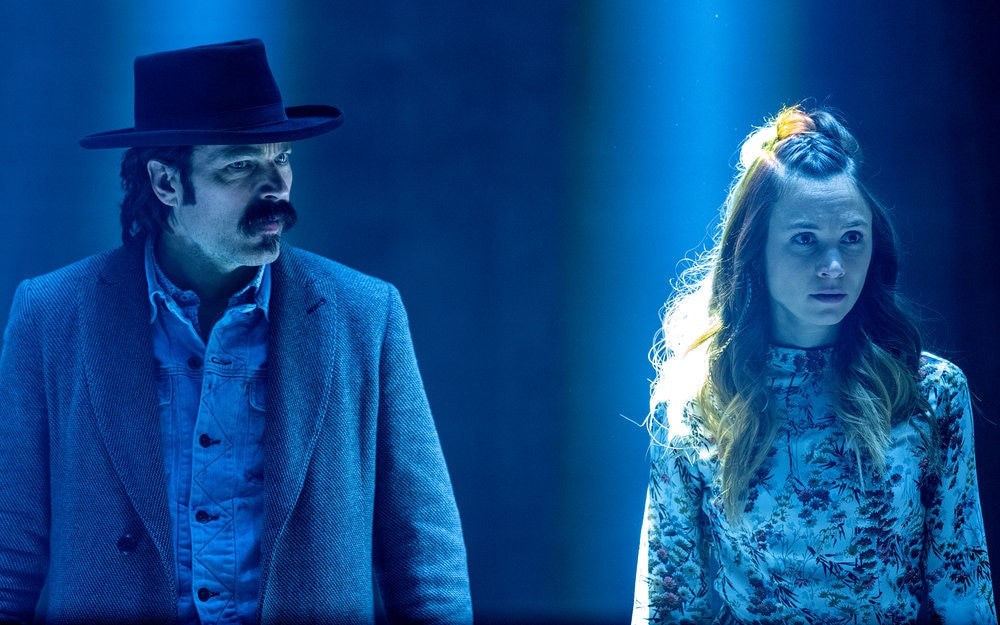 Back in Garden, Waverly and Doc experiences memory lapses and couldn’t recollect the faces of their loved once. After which Waverly slips out and tries to feed her blood to the creature in the well. And it seems to like her. The being, lights the path to some other place where she had to choose one out of four choices without context. The options were #1 Wynonna Earp, #2 Doc Holliday, #3 Waverly Earp, and #4 Nichole Haught. And it seems to choose Nicole, and she appears naked and lost.

The start spends some time to settle the character up.
Kate’s character was a bit de-centralize.
The love between Nichole and Waverly when Kate asked about things belongs to Waverly, replying, “Yeah…me.”
Wynonna keeps up with her ‘One man army type of thing,’ also realizing about the mistakes she had done.
The episode led to see funny moments between Wynonna and Nedley.
Jeremy ends up as a guy who knows more than what he let to know, by scribbling ‘Valdez’ on the wall.
Doc always makes it funny, “This is Eden? It’s not the way they wrote it up.”
We felt the anger of Nicole while punching Wynonna.

Also read: White Lines Season 2. While Netflix come up with a new season of this mazing show?