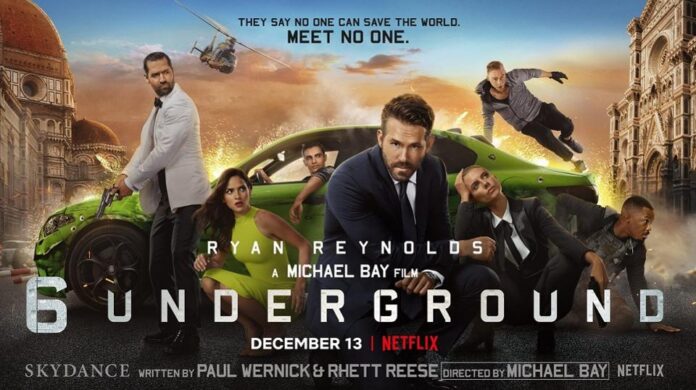 After recent massive hits like The Irishman and Marriage Story, Netflix is back with a fully loaded action package of Ryan Reynolds starrer 6 Underground. As Reynolds put it in an interview with Empire, “a lot of explosions,” our expectations from this action movie has reached the skies.

This massive action blast released on Friday, the 13th of December, at one minute past midnight.

The film runs for 128-minute and is an ultimate package of stunts and twists.

The release of the movie in your territory depends on your time difference from the California headquarters of Netflix.

Directed by Michael Bay, this movie has a complete set of one of the best action sequence actors.

Ryan Reynolds, the Deadpool, and Detective Pikachu fame will play the lead role in the movie.

Inglourious Basterds and Now You See Me star Melanie Laurent will be seen alongside Reynolds in this explosive action package.

Adria Arjona said there is some character development in the movie. She said, “You see things blowing up, and it is an enjoyable crazy ride, but at the same time, the journey that these characters go on, this team of flawed individuals who are at rock bottom and, through finding each other, find a way to keep moving—that is special and different.”

6 Underground: SPOILERS, Plot, and what to expect?

Here is what we have gathered from the official Synopsis that Netflix provided.

“What’s the best part of being dead? It isn’t escaping your boss, your ex, or even erasing your criminal record. The best part about being dead…is freedom. The freedom to fight the injustice and evil that lurk in our world without anyone or anything to slow you down or tell you ‘no.’

“6 Underground introduces a new kind of action hero. Six individuals from all around the globe, each the very best at what they do, have been chosen not only for their skill but for a unique desire to delete their pasts to change the future. The team is brought together by an enigmatic leader (Ryan Reynolds), whose sole mission in life is to ensure that, while he and his fellow operatives will never be remembered, their actions damn sure will.”

In the trailer for the series Ryan Reynolds calls the movie “the most Michael Bay movie in the history of Michael Bay.” In an interview with Empire, he added, “I was excited to work with Michael on more of an old-school version of a Michael Bay movie: no giant robots chasing anybody, no Transformers or Decepticons. But it’s still very fucking crazy. We joked a lot [on set] that no explosions were harmed in the making of this movie.”