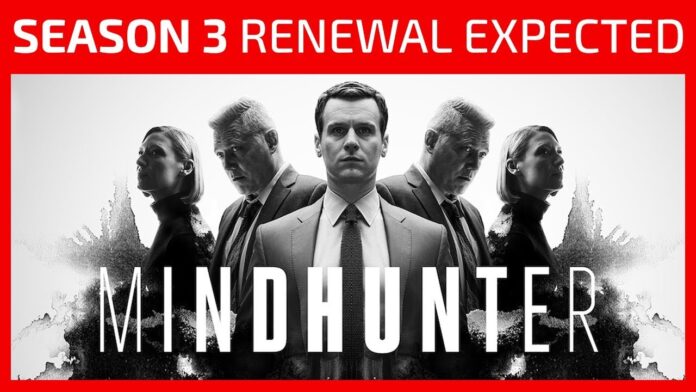 Mindhunter season 2 was released in August earlier this year and had a great response from all the views. While the online video streaming platform does not yet confirm the launch of season 3 but it can be on the cards according to the reports.

The second season which was a blockbuster on Netflix revolved around the Atlanta Child Murders of 1979 to 1981, and the fans of the show who have already binged through the episode are excited to find out what’s next in the store for them.

Will there be another series of Mindhunter?

Netflix is yet to give any confirmation regarding the release of Season 3 of Mindhunter. With the release of season 2 just a few months ago, it’s entirely premature at this stage to interpret whether the drama will be returning or not.

However, the series star Holt McCallny in an interview with PopCulture said: “I don’t think anybody knows right now, in August of 2019, exactly what lies in store for Holden and Bill, and Wendy. “We are hopeful that we will get to do the whole five seasons because the audience seems to have responded to the show, people like the show. And we’re very proud of the show and very excited to keep making the show.”

The writer of Mindhunter, Joe Penhall, previously told the Metro that he has a “five-season bible” for the show, which hints directly that there are going to be more seasons.

If there is a go-ahead of the Mindhunter saga, then the fans might have to wait a little more.

As David Fincher is working on other films altogether, there is a convincing reason as to why season 3 might get delayed.

As per reports from The Hollywood Reporter, Mindhunter Season three is “on hold while Fincher focuses on his next feature”.

Season one was released on October 13, 2017, while the Second season arrived on August 16, 2019, which marks nearly a two-year gap in the subsequent installments.

If the third season is in the box, then the viewers might have to wait until 2022 before it goes on air.

From the recent activities of Netflix, it is evident that Netflix has become more cautious in renewing the shows. However, Fincher is reasonably confident that his show still has a long way to go ahead as the audience response to the show has been amazing.

Earlier Fincher told star Holt McCallany: “Listen, are you ready to do this for five seasons? Because even if I f*** it up, it’s going to go five seasons, and I don’t intend to f*** it up.”

Season three will be in the lead by Jonathan Groff and FBI agent Holden Ford and Holt McCallany as Bill Tench will be back presuming their previous roles.

Also, Anna Tovr, as psychologist Wendy Carr will be back in the franchise as a part of the Behavioural Science Unit, helping the agents to profile serial killers.

Cameron Britten is expected to return as a real-life serial killer Ed Kemper, who has also featured in the first and second runs. While talking about his role as the serial killer, Britten broke down in tears and told how the character had affected him.

However, whether Hannah Gross will be returning as Holden’s ex-girlfriend, Debbie Mitford, is still in question.

Mindhunter Season 3: What to expect?

Mindhunter is based on the non-fiction book “Mindhunter: Inside the FBI’s Elite Serial Crime Unit” by real-life FBI agent John E. Douglas and his writing partner Mark Olshaker.

The book revolves around Douglas’ memoirs. The book is an account of how he started solving serial killer cases and some of the high-end cases he dealt with.

However, the book was dramatized for the small screen by Mindhunter Series Writer and British playwright Joe Penhall.

Douglas has inspired Ford’s character in the series, while that of Trench revolves around the FBI agent Bob Ressler. Moreover, Douglas has also served as an executive producer on the Mindhunter TV show.

If the drama continues to follow the tracks of book, then we see criminal profiling of the mid-80s in season three.

Given the timeline, we can expect interviews with Ted Bundy, Lawrence Bittaker and Roy Norris who were some of the most notorious serial killers in the history of US and were nicknamed Toolbox Killers, and Robert Hansen better known as the Butcher Baker.