Home Top Crime News Woman Stole New-Born Baby Because She Was ‘Scared To Tell Husband Of... 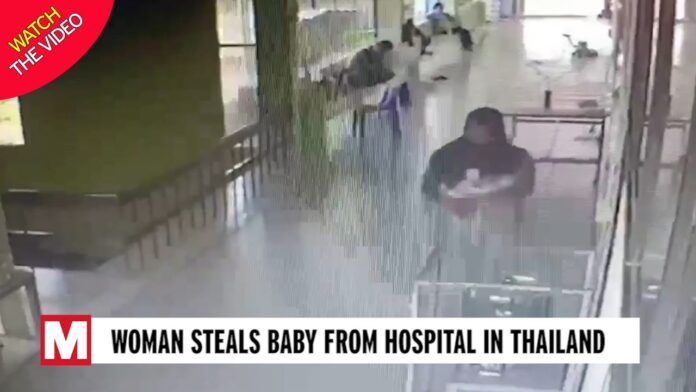 A woman stole a new-born baby from a hospital because she was afraid to tell her husband that she had a miscarriage.

Woman names Sriwaluck Akethamsatien, aged 27, tragically lost her baby last month but as his husband “was excited about becoming a father”, did not want to disappoint him.

Sriwaluck said she continued pretending to be pregnant before visiting the hospital in Phang Nga, located in southern Thailand.

There she befriends a couple who had just welcomed a baby girl.

The following morning she shrewdly offered to help the family and picked the bay, and started walking around in the hospital with it.

She used a Hijab to cover her face. Interestingly, she is Buddhist and not even Muslim, even though she used the hijab to protect her identity while carrying out this crime.

CCTV then captured her running away with the baby in her arms.

She was caught on camera fleeing through the hospital corridor before climbing on the back of a motorcycle.

She then took the baby home, show it to her delighted husband.

Her husband, unknown to the crime she had committed, believed it was his daughter.

Upon investigation, cops traced the motorcycle’s license plates and found the owner of the bike.

A 50-year-old man named Chatchai Thongchai owned the bike. Police questioned him about the incident.

When asked about the event, he said, “I did not know the woman but had just finished my appointment and was about to leave the hospital, when she asked for a lift to the bus terminal.”

He further added, “I accepted because I felt sorry for her, she was carrying a new-born baby under her arm in the burning sun. She asked me to drop her half a mile away from the hospital.”

However, tables turned when Sriwaluck had forgotten her bad at the hospital.

In it, police a bus ticket for the station near her house.

That night, cops raided her house found her and the baby girl safe.

Reportedly, following the incident, the husband was shocked when he got to know what had happened and that the baby was not his.

Sriwaluck was arrested by the police that night, for the heinous crime she committed.

In her confession to the police, she told that she stole the baby because she did want to tell her husband about her miscarriage as he wanted to become a father and have a baby.

Sriwaluck said, “I was pregnant but had a miscarriage, and I could not tell my husband because he wanted to have a baby so much.”

She further said, “I kept on pretending to be pregnant, then I told my husband that I would go to the hospital and stay there to give birth to the baby. I spent that time making friends with the family who had a baby girl.”

“I took the baby after they trusted me to hold her and brought her home. My husband was glad because he thought it was his baby.”

“I am not a Muslim, but by dressing in a Muslim outfit, I knew it would be harder for anyone to find me.”

Police Lieutenant Colonel Niphon Yanpisarn said that Sriwaluck faces up to five years in prison for kidnapping a child.

He said: “The suspect has admitted her actions. She could face three to five years in prison, but it all depends on the legal process. We are consulting about how to progress the case.”