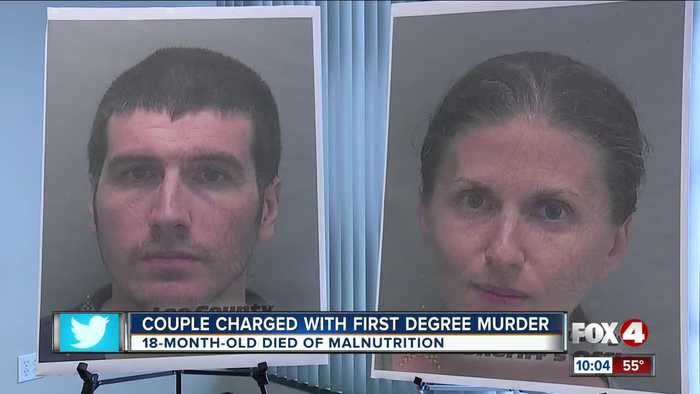 An 18-month-old toddler shockingly passed away in September from malnutrition.

The parents of the child, who are vegan have been arrested by the Florida police on charges of manslaughter and child neglect.

Around 4 am on 27th September, Sheila O’Leary nursed the child briefly and became worried when the child began breathing shallowly, she told the authorities.

However, rather than to call for help, O’Leary went to sleep.

The paramedics responded to a 911 call later that day and declared a boy dead at the home in Cape Coral, Fla.

According to police reports, the toddler weighed 17 pounds when he died.

The Centers for Disease Control and Prevention reported that the child’s weight is less than the average for any other child his age.

Sheila and Ryan O’Leary told investigators that they are vegan and follow the vegan diet which includes eating only fruit, vegetables and raw foods, such as mangoes, rambutans, bananas, and avocados, according to the News-Press.

The toddler’s diet was supplemented with breast milk.

The child was home-birthed and had never visited a doctor.

On the 6th of November, the couple turned themselves in to authorities following the release of an autopsy from the medical examiner’s office: the cause of death was malnutrition and complications, including dehydration, microsteatosis of the liver, and swollen hands, feet and lower legs.

The duo was booked at the Lee County jail on charges of felony manslaughter and child neglect.

Attorney John Musca, who is representing the 35-year-old mother, in a statement on his law firm’s website, called the boy’s death “tragic.”

He said that the toddler was “struggling with illness for the past six months, making it difficult for him to eat.

“The mother said that the little boy began to recuperate, but then started teething, causing him to have new struggles with eating.”

Ryan O’Leary who is aged 30, has not yet listed any lawyer in the Lee County Jail as per the records.

The O’Learys have two other children together, 3 and 5 years old, respectively.

The police spotted both the children at their residence in September.

The News-press reported that one of the children had blackened and decaying teeth, and added that both of them were extremely malnourished, weighing under the third percentile for their age groups.

Sheila O’Leary told the police that all her children were home-schooled.

However, law enforcement was not able to find records of them actively enrolled in a home-school program.

NBC News reported that the children were removed from the home and are being looked after by the Department of Children and Families’ care.