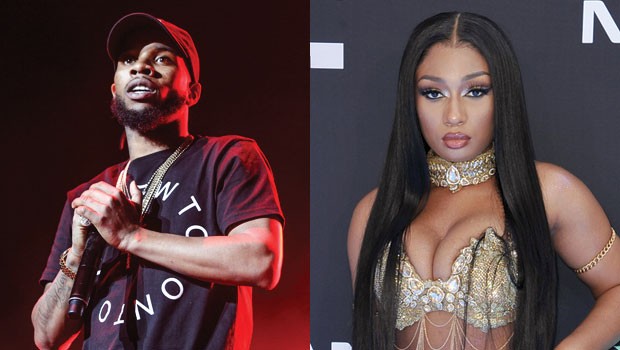 “Megan, people, tryin’ to frame me for a shooting/How the f– you get shot in yo foot it don’t hit no bones or tendons? How the f— is your team tryna’ pay me in millions?” he says. In another part of the song, Lanez raps, “I ain’t charged with no cases” and “Girl, you had the nerve to write that statement on an affidavit/Knowing I ain’t do it, but I’m coming at my truest.”

Earlier by today, Tory hinted that he would finally speak about what happen. “To my fans … I’m sorry for my silence ….but respectfully…. I got time today …… 9 PM PST,” he tweeted on his twitter social handle with 1.9 million followers including the time. It is a sign for the first time Tory has publicly confess the July 12 accident. The incident which the Los Angeles Police Department reported happened around 4:30 AM in the Hollywood Hills. It is the same night, when Tory arrested and booked for keeping of a secrete gun.

Megan, in tears, admitted about being shot on July 27. She describes the incident as the ‘worst experience of my life.’ The “Savage” rapper declined to name Lanez at that time, but she throws a light that she did not cut her feet on broken glass, which she previously reported to LAPD. “I was shot…in both of my feet, and I had to get surgery to get the s— taken out, to get the bullets taken out. And it was super scary,” she added.

Megan Thee Stallion confirms that Tory Lanez shot her while she was trying to walk away after an argument. He’s done. pic.twitter.com/sqpTAY2pmQ

The rapper confessed that Tory was the one who shot her. “Yes…Tory shot me,” she alleged on August 20 via Instagram Live. Megan added, “You shot me. and you got your publicist and your people going to these blogs, lying and s—…stop lying.”