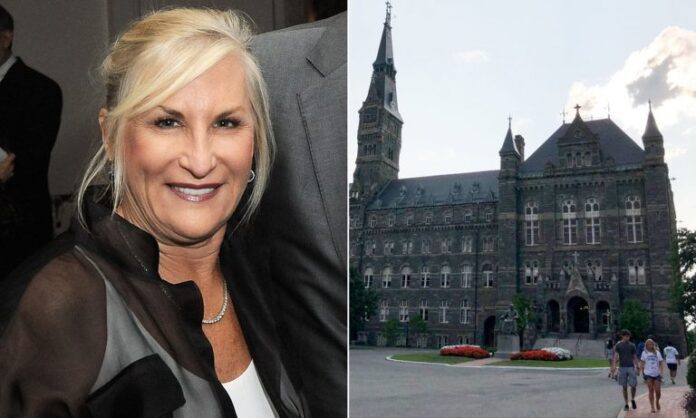 This mom has taken the college scandal to a whole new level.

Unlike many, she was arrested in the college admissions scandal not for bribing her kid’s way into college; instead, she coughed up the cash to help him, graduate.

Karen Littlefair, California’s mother, aged 57, will plead guilty for committing the crime of paying thousands to have a proxy take online classes for her son at Georgetown University so that he could graduate from the prestigious institution, federal prosecutors announced Monday.

According to Massachusetts US Attorney Andrew E. Lelling, Littlefair offered $9,000 to corrupt college counselor William “Rick” Singer for having his employees take four courses in her son’s place from 2017 through April 2018.

The officials have reached to the depths of the scandal and had a shocking result.

Dozens of other parents, including actresses Felicity Huffman and Lori Loughlin, have been arrested in the far-reaching scandal for allegedly paying Singer to inflate their kids’ test scores or athletic prowess so they could get into top colleges. But Littlefair was busted first for helping her son cheat while in school.

The charging documents stated that the Newport Beach woman paid to have a female employee of Singer’s take three online classes at Georgetown for her son, including one that required video conferences with the professor.

According to the court documents, “Littlefair wrote that because her son would be out of the country, [the proxy] ‘should have a stand-in for [my son] that is highly briefed… at this appointment,'”

The surrogate gave Litterfair an assurance that if her son couldn’t make the video conference, “she would ‘take care of the meeting’ with the professor by using a ‘fellow male colleague.'”

It’s unclear whether if the switcheroo occurred or not.

The filing further stated that Littlefair wasn’t always happy with the agreement and wrote to the surrogate that “she thought she would be given a ‘discount’ because the grade [she earned] was a C and the experience was a nightmare!”

According to the documents, on May 19, 2018, Littlefair’s son graduated from Georgetown, based in part on the academic credits fraudulently earned on his behalf.

Littlefair will plead guilty and carry a sentence of up to 20 years in prison, as to one count of conspiracy to commit wire fraud up to three years of supervised release and a fine of up to $250,000.

A plea hearing has not been scheduled yet.

Prosecutors said that a four-month prison sentence would be recommended by them along with a year of supervised release and reducing the fine amount to $9,500 and restitution.

Kenneth Julian, Littlefair’s attorney, said, “My client has taken the earliest opportunity to take responsibility for her conduct.”

A Georgetown spokesperson said an investigation conducted by the university in the wake of the first college admissions scandal indictments found “potential misconduct relating to one graduated student taking online courses.”

The spokesperson said the school has “implemented or are in the process implementing a number of additional measures to safeguard the security and identify of online course participants.”

Chelsey Tucker - Wednesday, 8 February 2023, 04:22 MST 0
Even though gambling has been illegal in Japan for many years, the country is now recognized as having one of the world's most significant...