Emma Watson and Tom Felton: Are They Dating? Let’s See What Rupert Grint Has to Say About It! - The Nation Roar 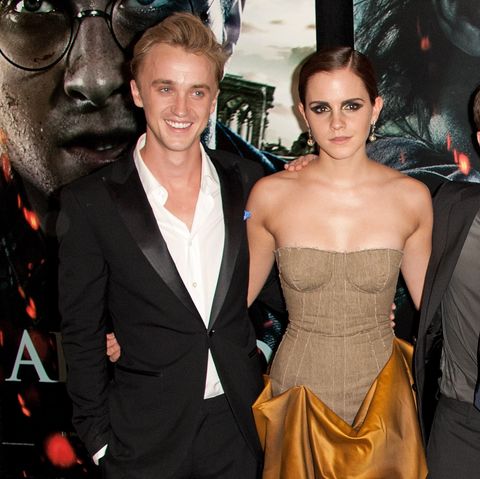 There have been rumors sparking a ‘connection’ between Happy Potter stars, Emma Watson and Tom Felton.

Well, here everything you need to know!

Every Potterhead has something to say about Emma and Toms’s alleged relationship.

Here’s what Rupert Grint has to say.

Well, Rupert also has some convincing evidence for us to believe that the duo might be a match off-screen.

In a recent interview, Grint weighed in on the rumors about Watson and Felton’s relationship based on what he saw on the Harry Potter set and his comments will keep that ship sailing.

When Rupert was promoting his new Apple TV+ thriller ‘Servant’ from M. Night Shyamalan, he said to Entertainment Tonight that ‘there was always something’, between Emma and Tom who played Hermione Granger and Draco Malfoy in the Harry Potter series.

Rupert said, “There was a little bit of a spark.”

Grint had no intention of starting any rumors, but he said that he couldn’t lie and repeated there “were some sparks” between the two young Harry Potter Stars.

Grint added, “But we were kids”, which they very much were.

“It was like any kind of playground romance,” Grint added, making those sparks sound like they were NBD.

But their fans all over the world, probably hope so.

The friendship between Watson and Felton has had some Potter diehards wondering if these two are in a love spell of their own.

There were rumors for years that Watson and Felton were dating, but the two have sworn they are just very close friends.

However, their fans have been looking for clues that they might be something more.

In the past summer, on her Instagram handle, Felton posted a photo Watson took of him at the beach, which signaled to fans that they might be on holiday together.

In another photo, it was seen that Felton was teaching Guitar to Emma and the duo was touring South Africa.

This photo made the fans go “aww.”

However, when about the relationship, Watson told British Vogue that she was “self-partnered” and not single.

However, it was Felton who came out in strong support of his friend’s self-proclaimed relationship status. “I like it! It’s the first I’ve heard of it, but it’s great,” he told the Daily Mail. “I’m in the same category, to be honest with you, quite happily self-partnered.”

Now, it’s very possible those long ago Harry Potter sparks just turned into a big-time friendship, but many will still be saying that there is a true romance between Watson and Felton.

Possibly, even their Potter castmates might be wishing the same.