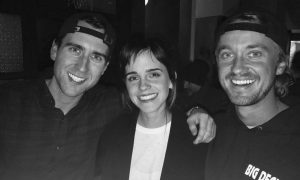 This Christmas comes with good news for Harry Potter fans. We are all excited to see the photos and reunion of the Harry Potter cast. And especially when it’s come to see Emma Watson and Tom Felton.

Harry Potter and the Philosopher’s Stone was the first part of the Harry Potter series. It was released on 12 April 2002. It’s been 17 years to the cast act together on screen. In the movie series, we used to see Draco Malfoy and Emma Watson at the opposite side every time. But in real life, we all know that the cast of Harry Potter are so close to each other that we get many pictures of them on social media.

In 2019, we were not expecting a Harry Potter reunion because of the busy schedule of stars. But the cast of Harry Potter is too amazing to surprise us. Emma Watson put the Photo reunion.

Merry Christmas from us ☺️

Emma Watson quoted the caption as Merry Christmas from us ☺️. It’s so satisfying to see this cast together in one after so long time. Tom Felton has also put a Reunion post on Instagram.

here, are the caption