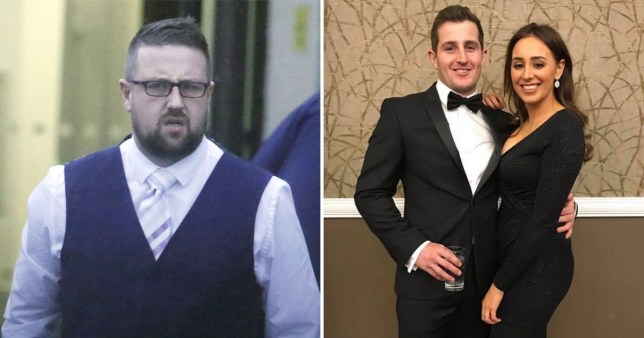 Just a few hours after their wedding, the bride walks away from her groom after being violently attacked by the best man.

Erin Mason-George and Steffan Wilson tied the knot four months ago. However, their big day took a dramatic turn when the groomsman punched Erin and dragged her through the stairs after being highly drunk.

Tomos Rhydian Wilson, aged 29, first attacked two of the bride’s sister and then her mother in a drunken row, before abusing the bride.

The best man then assaulted Erin by grabbing her by her wedding dress and pulled him downstairs as he expressed his disagreement with his brother’s decision on marriage with Erin.

Friends of the newlyweds told Mail Online that the couple decided to “go their separate ways” following the brutal attack.

An unnamed friend of the family said, “The marriage was all over in a day, which must be some record.”

They further said, “They weren’t even married long enough to get a divorce, I’m told they’ve gone for an annulment.”

The most shocking point for the couple was when Steffan reportedly decided to go home with his brother, rather than bride Erin, even after she got brutally attacked.

One of their friends told the website, “The groom had a choice to make – either his wife or his brother and father.”

“When he went back with them, that was it; the marriage was over.”

Moreover, according to the reports, Wilson also attacked the manager at Lampeter’s Falcondale Hotel, in southwest Wales, on July 27 this year, which marks his high tempered behavior.

He was found guilty of five charges of assault and two of criminal damage at an Aberystwyth court earlier this week.

WEDDING FIGHT: How it all started, and what exactly happened?

Wilson got drunk during the marriage and started behaving indecently. Following his such behavior, the family asked groom Steffan to get Wilson to bed. This made Wilson go mad with rage and commit the crime.

He expressed his disagreement over the marriage, saying his brother should never have married Erin and that he was “no longer a Wilson.”

Wilson lost his mind with anger and tried throwing punches at the bride and then assaulted her mum, Linda, her younger sister Dion, and grabbed her other sister, Cally, by the neck, causing reddening. This made the entire bride’s family ashamed as well as angry on Wilson.

Furthermore, Wilson then damaged the hotel manager’s shirt and fixtures and fittings at the Falcondale.

During the hearing, District Judge Gwyn Jones said the “thoughts and bad memories of what should have been a happy event would be there for some time.”

But Wilson, in an attempt to save himself from any punishment, tried pinning the blame on Erin, claiming she had slapped and sworn at Steffan and shoved him.

Following the disrespectful events, Harry Wilson, the second-best man, had also told the court he saw Erin “slap” Steffan and claimed he fell down the stairs.

Following the wedding feud, it’s been revealed that Steffan was charged with attempted murder earlier this month.

According to reports from Mail Online, the soldier is also accused of beating up taxi driver and father of two Noby James after a night out near his army barracks.

But, now he is in custody and will remain behind bars until his trial begins after the New Year.

Colin George, Erin’s father, told the website he was aware of Steffan’s charges and was relieved to see Tomos convicted of his actions at his daughter’s wedding.

He said, “All we wanted as the truth to come out in court, and that’s what happened.”

He further said to the media that it’s too early for Erin to talk about it, and she needs some space right now.