Home Entertainment TV Shows AVENUE 5: Series Premier, Cast, Story And Everything That You Should Know 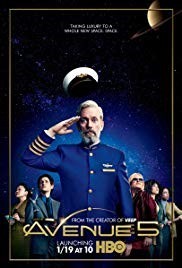 Hugh Laurie, as Ryan Clark, the main leader call as captain of Avenue 5.

Suzy Nakamura as Iris Kimura, a co-owner of Avenue 5.

Rebecca Front as Karen Kelly, a traveler aboard Avenue 5.

Josh Gad, as Herman Judd, the billionaire owner of Avenue 5.

Lenora Crichlow, as Billie McEvoy, one of the engineers on the Avenue 5.

Ethan Phillips, as Spike Williams an astronaut who is now a womanizing alcoholic.

Himesh Patel, as Jordan Hatwal a stand-up comedian who takes up an eight-week residency on Avenue 5.

The story runs 40 years in the future when the solar system is the world’s oyster. Avenue 5 follows the captain and crew of a luxury space cruise ship as they navigate disgruntled passengers and unexpected events after experiencing technical difficulties onboard. Captain Ryan Clark and his crew deal with the malfunction crisis caused on the space cruise ship Avenue 5 carrying several people.

The show has launched the trailer, and it will release on 19th January 2022 on HBO.

Avenue 5 has four episodes it will premier next episodes on every Sunday.