Home Entertainment Explanations The Platform: What is the real message? Ending Explained 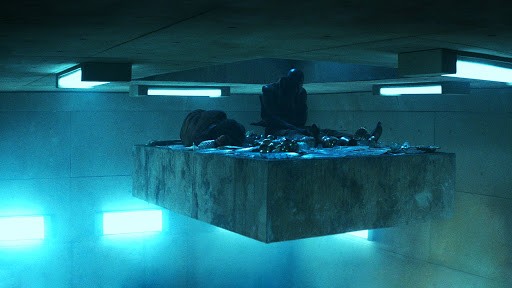 The Platform has left the viewers scratching their heads and with a bunch of questions unanswered. So here we are to answer them all and tell what message filmmaker Galder Gaztelu-Urrutia intended the audience to leave-

The protagonist of the film is Goreng (Ivan Massague), who voluntarily signed up for the stay at the prison for six months in return for a diploma. He wakes up at level 48 with his cellmate with Trimagasi (Zorion Eguileor). Trimagasi explained the rules of “The Hole.”

A banquet of food descend from above on a platform, leaving the upper-tier of prisoners to eat first, while those lower and lower, fight for scraps.

How did the movie end?

Goreng wakes up at level 6 with his new cellmate, Baharat. When Baharat finds himself at level 6, he uses his rope to ascend to the top of the tower to set him free. But this plan relies only on the kindness of the strangers above. The hateful racists above them shattered the whole idea.

Both decide to go till the very bottom and feed the people at lower levels. Till level 50, no one was served with food. They also saved the ‘Panna Cotta’ as the message for the administration that the tyrannical structure has not broken the human spirit.

Initially at level 171, Goreng calculated that there were 250 levels. But later, the duo made it up to level 333! There they found a young girl all alone at that level. She was Miharu’s missing daughter.

Goreng insisted on giving that panna cotta to the girl. After Baharat died because of his injuries, Goreng realizes that the little girl was the message for the administration.

The movie ended with Goreng sending Miharu’s daughter to the top through the Platform.

The movie is a metaphor for the class system and capitalism. The film indicates that there are enough resources and opportunities for everyone. But the greed and over-exploitation done by the people above make the people below suffer.

The same happens in the movie. There is enough food for everyone to survive and fulfill their basic requirement.

But the greed and overconsumption of food by the upper levels results in starvation in the lower levels. This eventually forces the people down there to find alternative ways to survive, and it also includes killing others and eating their flesh.

Goreng finds himself unable to go with the girl as the system has too brutalized him. He killed so many people and saw himself stuck in the same place. That’s why he didn’t go with the girl.

When Goreng meets Imoguiri, she tells him the central concept of the prison. The administration prefers to refer to the pit-like prison as a Vertical Self-Management Center (VSC).

For the food to reach down to the lowest levels, there needs to be a “spontaneous sense of solidarity.” So the people without communicating with one another must take only what they need.

She also said that children below 16 are not allowed in prison. Even though she worked in prison, she was not aware of anything happening like this there.

Instead of telling them that the prisoners can adapt to the system, he wants to show that those operating the system cannot be trusted.

So, the little girl is THE MESSAGE for the administration that those in power set the rules, but they don’t follow them themselves. They assured everyone they would never do something as cruel as allowing a child into such a horrendous existence. But that was a lie.

At last, this movie has a profound message in it. The Platform is streaming only on Netflix.