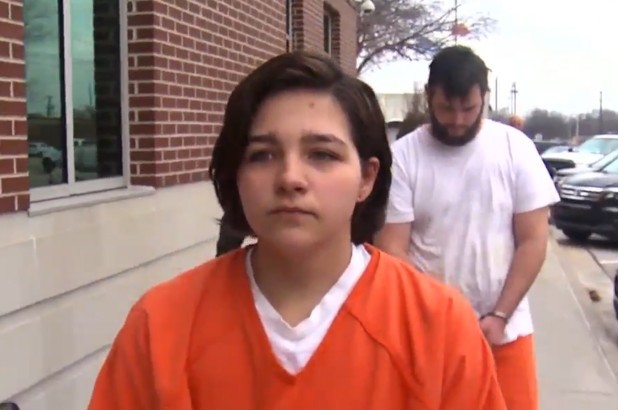 In a horrifying incident in Oklahoma, a couple murdered a 17-year-old girl as “payback” over a sexually transmitted disease.

The court document shows that the couple has been charged with the murder of the teenager.

Just hours after she was reported missing, Kirstan Patterson was found shot in the head on Wednesday.

Andrew Hall, 30, and Cheyenne Blalock, 17 were charged with first-degree murder in the death of the teenager, according to reports from KOTV.

Mayes County Sheriff Mike Reed told the station, “Be very careful who you hang out with and who you run around [with] because it can make a difference.”

He further added, “I promise you your parents would rather get up at 1 in the morning and come and give you a ride home than something detrimental happen to you.”

Upon interrogation, Blalock told the officials that Hall had planned to kill Patterson as a “payback” for a sexually transmitted disease.

He told Blalock to text Kirstan and set up a meeting with them on New Year’s Day, court documents show.

Blalock told the investigators that Hall hid her in the back of his car beneath a blanket and then picked up Patterson.

However, Hall told the cops that he was aware that Blalock was carrying a knife with her, and thought that she was “only going to physically assault” Patterson, was afraid that she would strike him if he didn’t comply with her demands, court records show.

Further, investigators developed a theory that Patterson was shot dead by either Hall or Blalock with a rifle they grabbed from Hall’s trunk.

Investigators from the Mayes County Sheriff’s Office thoroughly interrogated Blalock and Hall and said that both of them had implicated each other in the slaying.

Blalock said she heard two gunshots while at the Spring Creek Recreation Area, meanwhile, has denied witnessing the fatal shooting.

According to a court affidavit, Blalock admitted that she touch Patterson body to check her breath to confirm she is dead and further claimed Hall tried to clean up the crime scene before anyone sees them.

“Blalock said Hall poured bleach on the body in some effort to destroy evidence, and then Hall moved the body into the water,” the affidavit says.

Hall and Blalock had allegedly discussed several ways of killing Patterson and commit a heinous crime.

Hall and Blalock remain jailed on $1 million bond and are set to return to court on Thursday, the newspaper reported.