New England Patriots player, Hernandez who played in three seasons of the American football league, was arrested and convicted in accusation of the murder of Odin Lloyd, 27.

Odin Lloyd was Dating Hernandez’s sister. On 17 June 2013, he was shot repeatedly in Massachusetts Industrial Park. After nine days of Hernandez, along with two other men, were arrested and sentenced to life imprisonment without the option of paroles.

In 2017, Hernandez died waiting for an appeal of his conviction, which was almost five days after proving his innocence in the murder of the other two men. 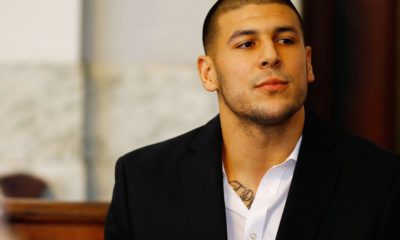 In his autopsy records, it was shown that he had been suffering from chronic traumatic encephalopathy, which is a form of damage to the brain caused by repeated injuries on the head, and it resulted in him losing control of his anger and impulses.

The trailer of this series, which is going to release next week, is based on the context of the psychological imbalances which must have happened in Hernandez’s brain resulting in him murdering Lloyd.

People who knew him used to call him a ‘Ticking Timebomb.’ Many interviews will be shown in this series given by his close circle, who will discuss his various drug addictions, gun usage, and his frequent anger outbursts, which used to become violent at times.

A call recording of him and his mother is present where he blames her for his mental imbalances.

‘I was the happiest little kid in the world, and you f***ed me up.’ he said to which his mother responded, ‘I ain’t living with that,’  ‘You did! I had nobody,’ he screams at his mother. ‘What did you think I was going to do? Become a perfect angel?’